The University of Mississippi’s Sally McDonnell Barksdale Honors College gave 181 freshmen the chance to go on trips in the United States in search of answers to the question “What should we remember?” through its Freshman Ventures program this year.

The students were divided into 39 teams of four to five and traveled to various places to interview people. On Feb. 2, the teams met at the Jackson Avenue Center, part of the Ole Miss campus, to do presentations on their trips and share what they had learned.

The two teams won a trip to a Broadway show of their choice in New York City next winter.

For the team members who traveled to 48 states in 15 days from Dec. 28 to Jan. 11, the last time they were in New York City was when the “ball dropped” in Times Square marking the beginning of 2019.

The Times Square ball drop was just one sight of many that Haakon Colwell, Richard Springer, Joshua Alinsub, Francena Sekul and Wil Stacy experienced on their trip of a lifetime.

Springer was the student who came up with the idea to visit every state.

After doing research, Springer found possible routes they could take and approached the Honors College staff about it.

“I asked Mrs. Penny (Leeton, SMBHC program manager) because DSG (Dean Douglas Sullivan-González) wasn’t in his office, and she was like, ‘That’s insane! You will definitely have to talk to him about it,” Alinsub said. “So when I talked to him about it at a later time, he was like, ‘Really? You guys are crazy.’ He didn’t believe it until we finished.”

The team members may have only been in states for a little while, such as being in Florida for 20 minutes or Maine for eight minutes, but they still accomplished their goal.

Before the trip, to even get that close to meeting their goal, they had to do months’ worth of planning, which included creating a budget, figuring out where they were going to stay at night and mapping a route for the journey.

“A lot of people put theirs together the week before it was due,” Alinsub said. “We were working on it ever since we heard about it.”

When it came to budgeting and finding places to stay overnight, the students realized they could stay with people they knew across the nation, so that’s what they did.

“We have families all over the nation apparently,” Stacy said.

Some of the memorable places they visited were Snoqualmie Pass in Washington state; Muir Woods National Monument, north of San Francisco; Washington, D.C.; the Space Needle in Seattle; and the Badlands and Mount Rushmore in South Dakota.

“Going to so many places I’ve never been before was a rewarding experience,” Sekul said.

“I feel like at most of the stops we made, we could have spent the full two weeks there,” Colwell said.

The team also enjoyed trying different foods across the U.S. such as deep-dish pizza in Chicago, New York cheesecake and Philly cheesesteaks.

“The deep-dish pizza lives up to its reputation,” Alinsub said.

As they traveled the nation in Springer’s Toyota RAV4, all of them agreed that sleeping in the car was the most enjoyable thing to do while they were on the road, but besides that, they kept their minds sharp in various ways.

Listening to the podcast “Crime Junkie” was probably the most entertaining activity, they said.

“It was entertaining until we got scared,” Alinsub said.

They felt the overall trip was split into two parts: time spent before and after Chicago.

“In the east, everything is close together,” Alinsub said. “In the west, you don’t see another town for 200 miles. It just stretches.”

Sekul mentioned how sometimes you could see cities in the distance, but it took hours before you would get there as the land stretched out beyond belief.

“We saw tumbleweeds! Like how iconic is that,” she said.

After asking people “What should we remember about our nation?” the students said people should remember that all of us have a different perspective of how we see the nation but also how special the United States is.

“We should remember how unique America is in people, landmarks and cultures,” Springer said.

‘What Should We Remember about Legal Immigration?’ 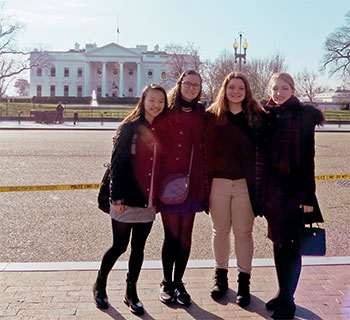 In their search for answers, they said all the officials agree: The policies of legal immigration are complex and outdated.

“For some countries, applications from 20 years ago are being processed today,” Rhodes said.

The team was told that the current policies are the same policies that were in effect in the 1960s.

“I think it’s good that we let people know just how difficult and complicated it is for people to come to America legally,” Newman said.

The students were amazed by how the current system works.

“It was an interesting and a very eye-opening experience for me to see what the current system is and find out more specifics about it that I didn’t know,” Cooper said.

After being informed about how the policies work, Newman said she believes that people should be looking for solutions to fix legal immigration rather than solely focusing on illegal immigration.

“I think that in overall immigration conversations, what policies actually work should be part of the conversation instead of just focusing on illegal immigration without talking about solutions,” Cooper said.

After learning so much and enjoying their trips, both groups said they are grateful for the Honors College and the experiences the staff allows them to have, from increasing their knowledge on certain topics to completely planning a trip on their own. The groups say Freshman Ventures is a highlight of their college years.

“It’s definitely a memory that’s going to stick out,” Rhodes said. “It’s definitely something I would encourage every incoming honors freshman to take advantage of because it is such an independent and professional experience.”

Kendall Patterson is a senior journalism major and an intern in University Marketing and Communications.